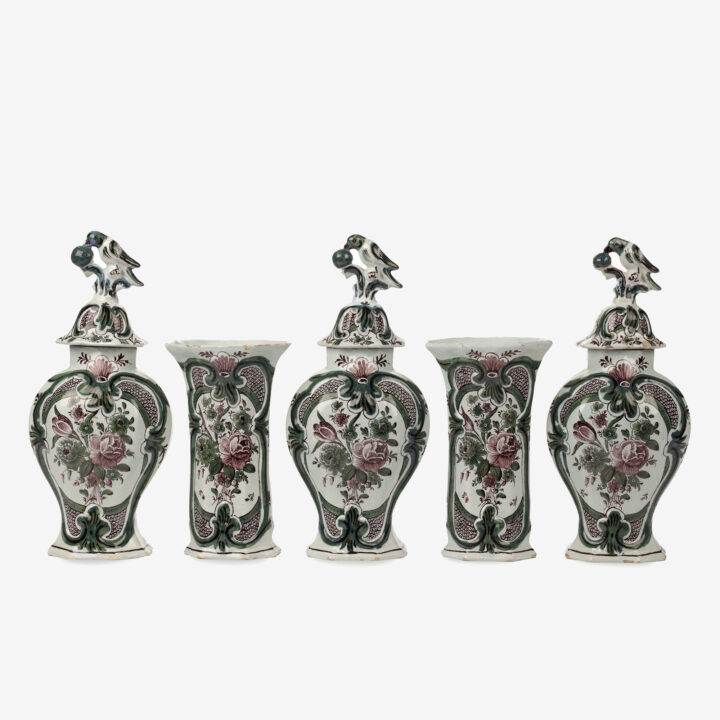 Literature: Jonkvr. Dr. C. H. de Jonge. Delfts aardewerk ( 1965) page 296 ill. 183. The only difference is that the lids are with flame shaped handles instead of the parrot with an apple.

comprising three baluster shaped vases and two beaker vases, also called ‘cornet’or trumpet shaped vases. Floral decoration in unusual colours, green and manganese. There is only one other similar set with the same decoration known which is part of the inventory of Duivenvoorde near Voorschoten. It is striking that the lids of these model of vases almost always include a bird, ( often a parrot) instead of a knob or a flame or sometimes a lion. These sets of vases are often sigend Lampetkan, like this set.

In modern times we are accustomed to using vases for flowers. However, sets of vases were used for decoration purposes by the elite from the seventeenth- and eighteenth century as a showpiece for cupboards and mantelpieces. When an inherited set consist of two or three vases it is often assumed that is was the complete set. However a set or garniture of this model usually consisted of five vases. In the early and mid seventeenth century sets of vases were hardly known, but later they become very popular. Presumably thanks to William III and his wife Mary, who were very fond of Delftware, sets of vases (garnitures) peaked in popularity in the mid eighteenth century, many of these sets are marked. These sets were used locally as well produced for export. Dutch Delftware was a ‘national product ‘.