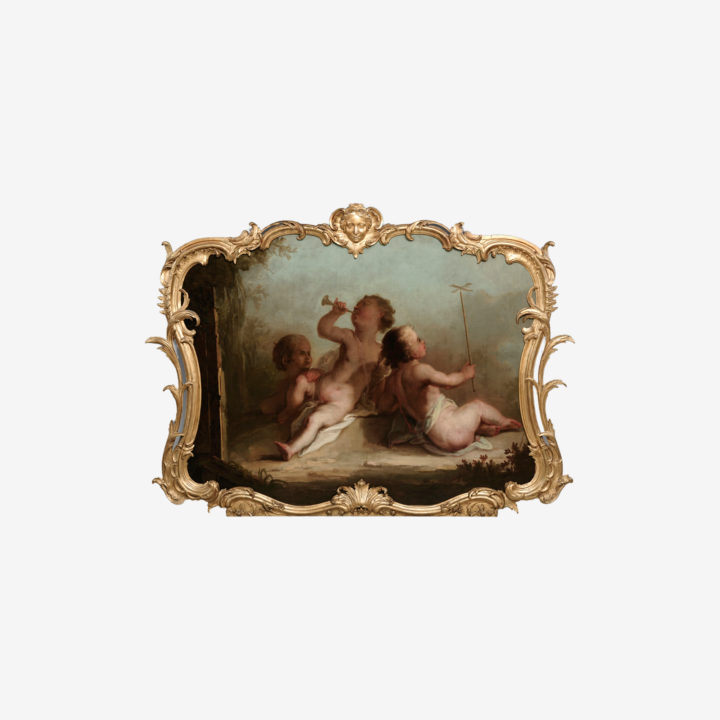 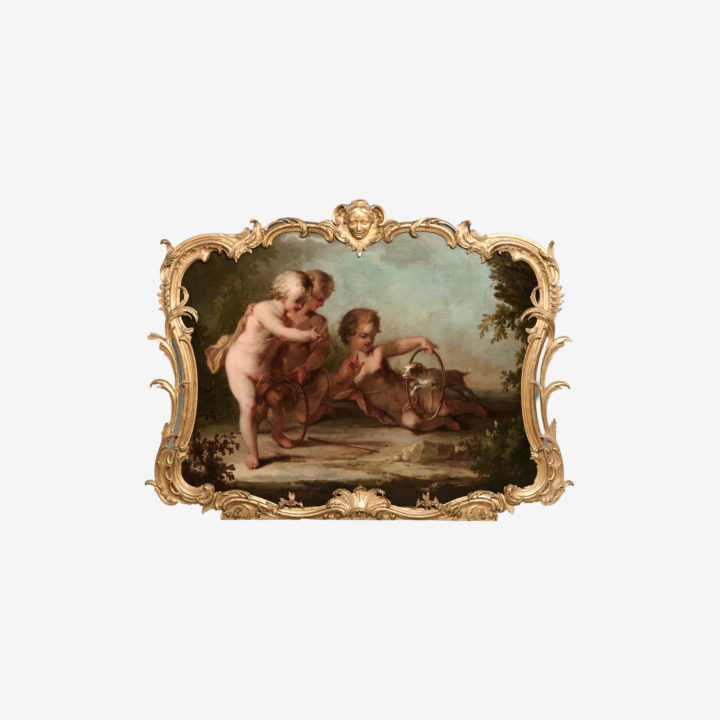 Johann Heinrich Keller introduced his “en français” painted children’s groups in The Hague. These differed in implementation of the children’s groups treated in greyness or white (to imitate stucco), which Jacob de Wit created in Amsterdam earlier in the eighteenth century. The children’s groups of Keller, modeled by example of François Boucher (1703-1770), are also “en camaieu”, ie in shades of one color, in blue, yellow, green or red. This was later followed by Keller’s student Dirk van der Aa (1731-1809), who was followed again by Hendrik Willem Schweickhardt (1746-1797). Examples of children’s groups are almost no longer present in situ.

There are still two sets of separate upper door pieces in the green room of the Lange Voorhout Palace. Dated 1751 and three upper door pieces and a mantle piece in the royal chamber. All these paintings were originally from Huis Fagel, Noordeinde 140. In addition to children’s groups, Keller also painted mythological scenes. The most important collection of this painter is located in the monumental building Prinsessegracht 28. These represent, among other things, capriccios and Venetian cityscapes.

The fact that so many expressions of decorative painting have been lost has to do with the constantly changing fashion in this area, as a result of which the inhabitants initially considered modern interiors to be dismissed as old-fashioned. The wall hangings, often of large dimensions, were cut loose, sometimes kept for a while in the attic, and then simply discarded. Chimney and upper door sections, which were easier to handle because of their more limited dimensions, often ended up at auctions, as is also the case with this pair of children’s groups, with the result that we can often no longer trace their original destination. Unusually rich are the original gilded lime frames that will also have originated in The Hague. As a result of inheritance, many interesting wallpaper paintings have become adrift. A recent ruling by the Supreme Court, in which it was determined that paintings etc that are part of the permanent decoration of the original interior, put an end to that forever.

Johann Heinrich Keller, was born in Zurich in 1692 as the son of Basel sculptor Johann Jacob Keller (1665-1747) and a grandson of furniture maker Johann Heinrich Keller the Elder (1627-1708). After an apprenticeship in Basel and Munich, he spent a year in Paris. There he must have been inspired by the work of Boucher. In 1726 he finally settled in The Hague, and in 1731 he became a member of the Pictura Confrérie. In 1752 he returned to Basel, but after a year returned to The Hague, possibly to produce the commission from Princess Anna decorations for the large gallery of the Stadhouderlijk Kwartier. Like Aert Schouman, Keller remained unmarried and died in The Hague in 1765.