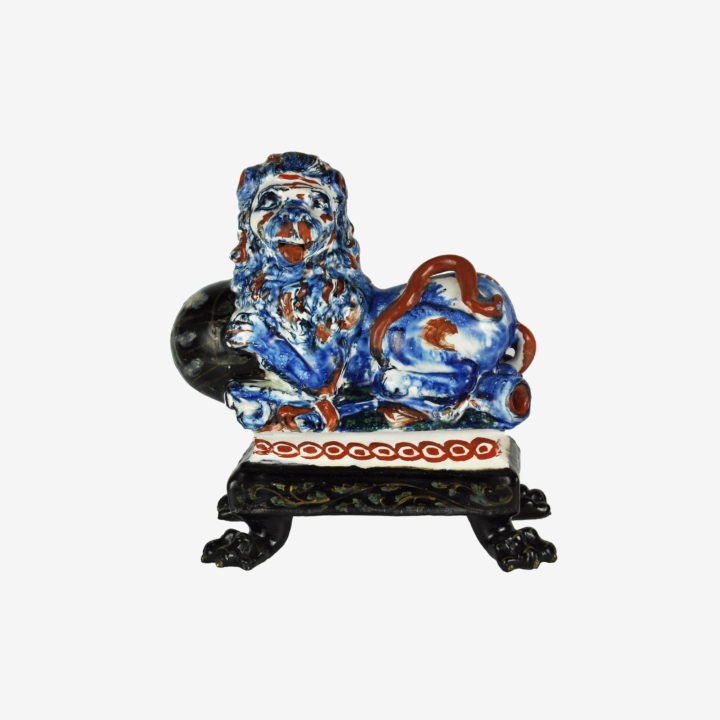 On a rectangular pedestal with cannons lies a lion holding a globe in its grasp. The four legs on which the whole rests have the shape of a naturalistic shaped claw. The lion is in grand-feu colors- blue, green and iron-red decorated, while the pedestal is glossy black, with distinctive yellow twigs which evokes direct associations with Japanese lacquerware. The deep black fond, which requires great technical skill, was best developed by Van Eenhoorn.

Presumably, such lions, of which couples are also known, have had a place on a desk as a symbol of power. The same lions are part of the royal tulip vase at Het Loo, with the monogram of King Stadholder William III.

The lion is unnoticed, but is attributed to De Metaale Pot on account of the reflective black ground, but there is an APK-marked lion in cachemire colors is known from which it can be concluded that in addition to the Metal Pot, the Greek A had also the same molds. This is by no means surprising because Adriaen Kocks, (the Greek A) was the brother-in-law of Lambertus van Eenhoorn; (de Metaale Pot.) and that there would have been no fierce competition between these two prominent plateel factories. It is known that Kock stood guarantee for his brother-in-law and rescued him several times from a nasty situation.