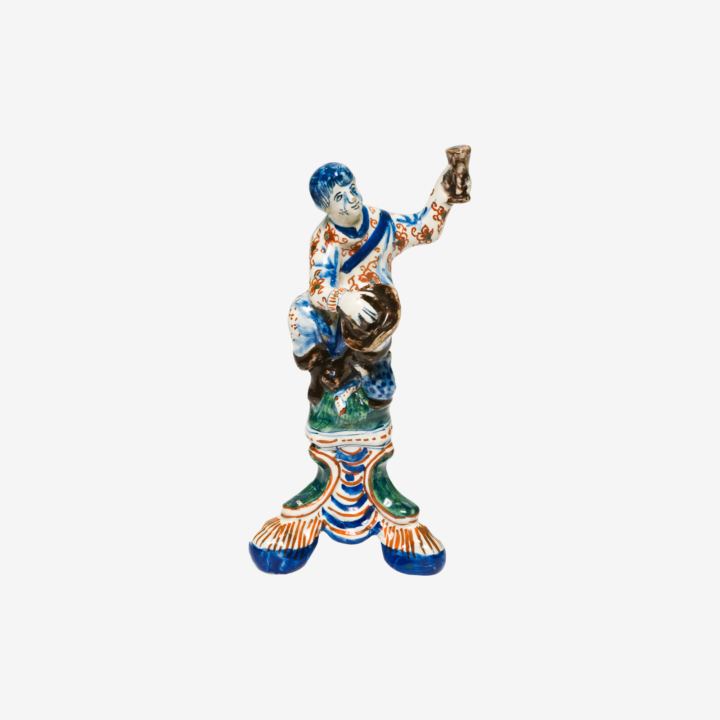 Statuette of a man standing on a tripod raising his glass with an elegant gesture. Although this statuette is unmarked, it can, for good reason, be attributed to the pottery ‘the Metal Pot’ led by Lambertus van Eenhoorn. In the collection of Van Evenepoel in the Museum in Brussels, there are two, in terms of shape, identical copies in “black delft”, both bearing the LVE monogram.

The subject, a drinking companion, must have appealed to Van Eenhoorn. He was known as a man with a fickle character, who happily spent his money on “drunk drinking” and other eccentricities. His brother-in-law Adriaen Kocks, nevertheless, stood up for him in 1691, when Van Eenhoorn took over the flourishing Plateelbakkerij De Metaal Pot, vouching for him. Despite these negative characteristics, Lambertus Van Eenhoorn managed to arrange his affairs well.

In 1691 and in 1693, for example, he signed a ten-year contract with Guilleaume Neuilleth, ‘sculptor and (red) teapot maker’ stating that Neuilleth was only allowed to work for him, even if, in the unfortunate premature death of Neuilleth, all models he had already produced would become the property of De Metaale Pot. As the name suggests, Neuilleth was from French descent. He probably learned the trade at the Rouen earthenware factory. By bonding with him, Van Eenhoorn wanted to assure himself of a good craftsman. It is indeed the case that the moldings from the Metal Pot period can be counted among the most beautiful ones. So this management certainly paid off in that respect. There are various small-sized statues that are placed on a pedestal in a tripod shape.