In cachemire colors on a black pedestal 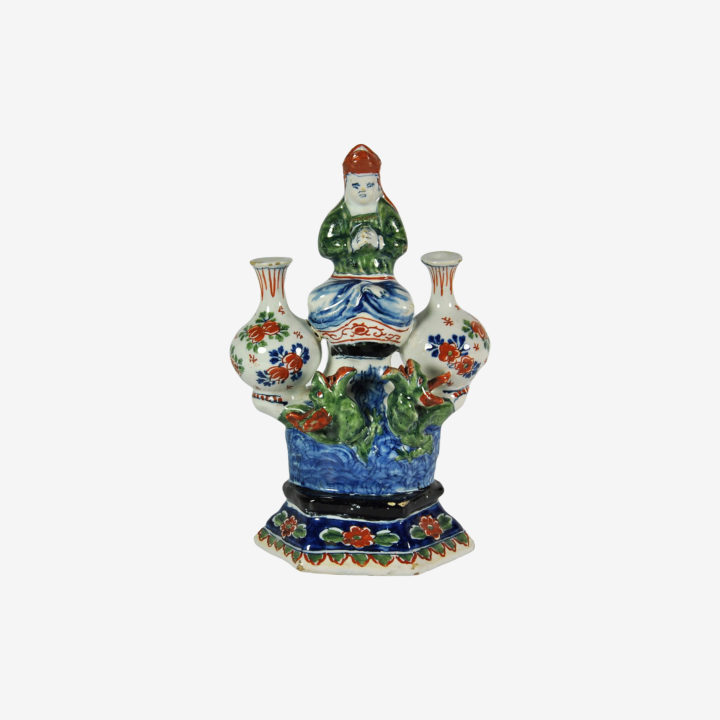 Origin: Delft, ‘The Greek A’ pottery

This group of statuettes is a very typical Delft object from the period around 1700. It is inspired by Chinese porcelain, whereby people were absolutely not bothered by any traditional images. In this way a highly artistic product is created in a manner that is unique in its own way and has never been shown before. Very shiny black (in the recess technique characteristic of PAK) is incorporated in the hexagonal base, which enhances the exotic appearance of the whole. The Quanyin, pictured cross-legged from the sea, should be sittiing on a lotus flower.

In addition, this Chinese goddess of mercy is accompanied by two dragons facing each other in the Delft group who came up from out of the sea. This fact was taken from a print with a depiction of a Quanyin by Martino Matinio published in Novus Atlas Sinesis in 1655 in Amsterdam. There, Quanyin sits on the usual lotus flower but lacks the perky dragon figures. Of this group of statues, only one other identical, also a ‘PAK’ marked copy is known in the Municipal Museum in The Hague. It is part of the extensive legacy of A.H. van den Burgh from 1904.