Man seated on a wine barrel 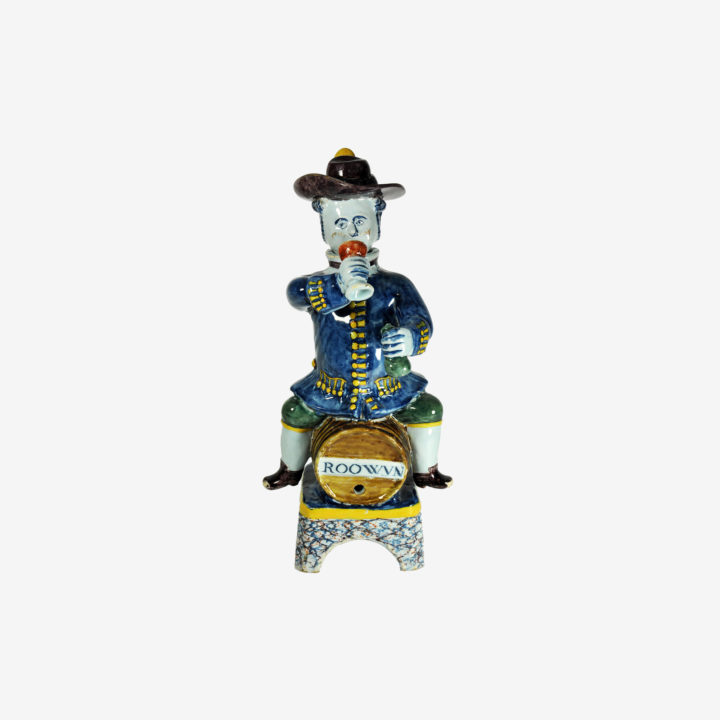 The man, who is seated on a barrel and drinks from a glass, is derived from the well-known Bacchus figures of which numerous specimens of sometimes huge dimensions are known from various German faience (pottery) centers. The most impressive ones were created in the Hannover Münden factory. It must also have been a popular subject in Delft. Different variants are known, with nice inscriptions such as Roowijn (red wine), White Wine Rinse wine (is wine from the Rhineland therefore also white wine) and Good wine.  The inscription Nantes is intended for liqueur. The function of this decorative object therefore leaves no room for clarity. The head is removable so that the fountain can be filled, and the tap at the bottom is meant to fill the glass.

In addition to copies of Delftware, wine and fountains of the same model are also known in Chinese and Japanese export porcelain. In the collection of Anton C.R. Dreesmann, which came under the hammer in 2002, were no fewer than two Delft, one Chinese export porcelain and the more rare Japanese version. This completes the overview.

From the sculptor Joseph Willems from Flanders, who was born in Ghent in 1716 and died in Tournai in 1766, a signed terra cotta wine fountain dated 1744 is known. This model, which is different from the one described here, also exists in Delftware. This terra-cotta specimen was probably an example that has been the model in one of the many production sites in Delft. Willems was a Wander artist who popped up in various places in Europe where porcelain / earthenware was made. His activities at the porcelain factory in Chelsea are best known.