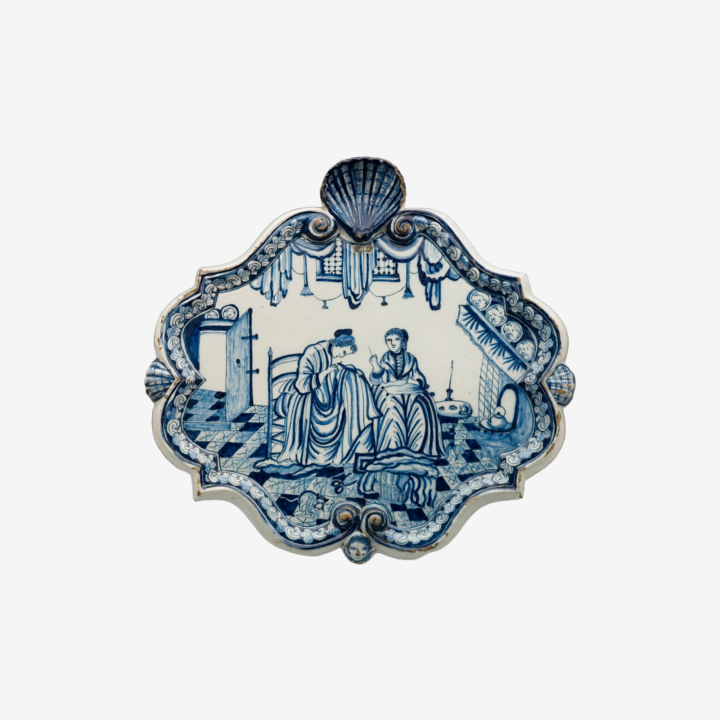 Under the influence of “father” Cats, a series of prints by Geertuyd Roghman was created in the period 1648 -50, in which Dutch housewives were portrayed with their activities, including two women who were sewing. He considered her task as the mistress of the house, her kingdom, as extremely important. He mentioned the woman who is highly valued by Cats as an inspiration for the activities described in detail in the house and garden, but… .. she was not allowed to serve in the church and rule in the cities for “sound reasons”.

The depicition on this plaque gives us a glimpse into a typical Dutch interior, with tiled floor, fireplace with plate rack and draperies. This depiction has undoubtedly been the most loved of all the five prints by Roghman. There are more plaques known with dressmakers. People clearly had difficulty with the perspective, a problem that we often find with faience painters. As a result of advancing insight, this plaque was probably created in Rotterdam in the factory on the Schiedamsedijk. Objects from this tile factory, where occasional ornamental items were also produced as by-products, exude a completele Delft atmosphere. The weight and the somewhat pointed shell with the somewhat thin glaze point in this direction. The plaque with a border has been embossed with the help of a form and the border has not been polished, which is common in the faience of tile factories, but not at the factory of the Aelmis family on the Schiedamsedijk.