Delft, with blue and white chinoiserie , Circa 1685 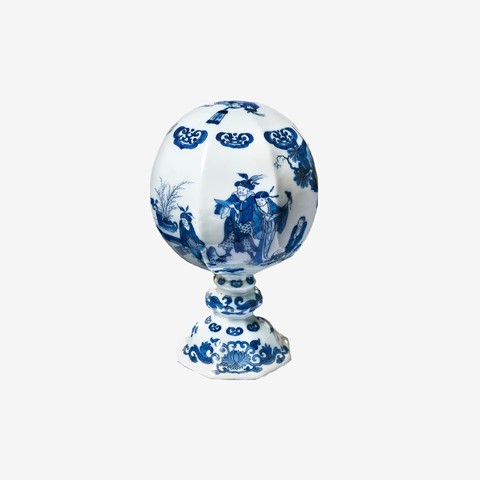 Wig stands are one of the most curious objects from the end of the seventeenth century. It is precisely in that period that so-called wig cabinets arise in castles such as Middachten bij de Steeg and Cannenburch in Vaassen. An almost identical wig ball, also bearing the Lambertus Cleffius brand, is part of the legacy of Mrs. Aronson Stigter at the Rijksmuseum in Amsterdam, as well as two related copies in the Royal Museums of Art and History in Brussels.

Delft earthenware bearing the LC mark stands out because of the relatively scarce (empty) but always extremely refined chinoserie decoration where the undecorated white part is indeed part of the composition. This is remarkable because usually the overcrowded Delftware was seen as a sign of wealth. Van Dam had doubts about the function of the object and found it rather an ornament. Wig stands were not only manufactured in Delft, but also in various faience centers in France, e.g. in Rouen and of various sizes. Interestingly, the recently published porcelain collection has been brought together by the Amsterdam banker W.F. Heukelom (1858-1937) by Jan van Campen, curator of Asian export art at the Rijksmuseum.

In this collection, which came under the hammer as “single owner sale” in 1937 at Sotheby’s in London, there were two “wig or hat stands” of blue decorated Kangxi porcelain, the shape of which is reminiscent of that of the wig ball. These very rare objects have traditionally been associated with what we then call a head covering.